‘Tis the season for warm cheer, visions of sugarplums, the scent of pine and the rich taste of eggnog. The Currier and Ives vision of an American Holiday Season may create a mythic standard here but not all across the globe. Consider a few fun traditions that are fixtures elsewhere.

The Legend of the Christmas Spider. There is a traditional Ukrainian tale of a widow who was too poor to provide presents for her children. Waking up on Christmas morning, her children found their tree covered with spider webs and as the morning sun illuminated the webs, they turned into silver and gold and the family was never poor again. Today, Ukrainians place small pavuchky (spiders) ornaments and tinsel all over their Christmas trees for good luck!

The Yule Goat. An ancient Scandinavian tradition honors the straw goat. The Yule Goat’s meaning has morphed in many ways over the centuries. In Sweden, people regarded the Yule Goat (Julbock) as an invisible spirit that would appear some time before Christmas to make sure that the Yule preparations were done right. Today, the Julbock is a standard Christmas decoration in communities, in homes and as ornaments on Christmas trees. 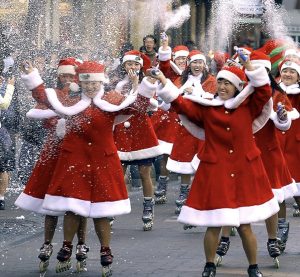 Roller-Skating to Mass. In Caracas, Venezuela, people celebrate Christmas Eve by going to early morning mass… on roller-skates! Streets around churches are closed to traffic as parishioners arrive on manually powered wheels. When Mass has concluded, they fill the streets in celebration – dancing, singing and enjoying food. It’s believed that the roller-skates are the alternative to snow sledding that is experienced at Christmastime in less temperate climates.

Kentucky for Christmas – in 1974, the newly established KFC Japan launched an advertising campaign targeting expats in Tokyo who longed for American food for the Christmas holiday. Much to KFC Japan’s surprise the campaign appealed to the entire population and a feast of KFC has since become a national tradition on December 24th.

A spider ornament may seem creepy, a huge straw goat may seem peculiar, roller-skating to church may seem unusual and Kentucky Fried Chicken seems like an odd holiday meal choice but when placed in their specific cultural contexts, all make complete sense. Culture frames all languages, which is why it’s essential to use a professional translation service to handle your global communications. At Auerbach International, we’ve spent more than three decades ensuring that we translate the words, in the correct cultural context, of your business communications in over 120 languages… and we do so accurately and precisely. Give us a call and let us help ensure your global and multilingual success.

A healthy and joyous season to all!

Where is your next billion coming from?: Tom Fuller of Fluent Research